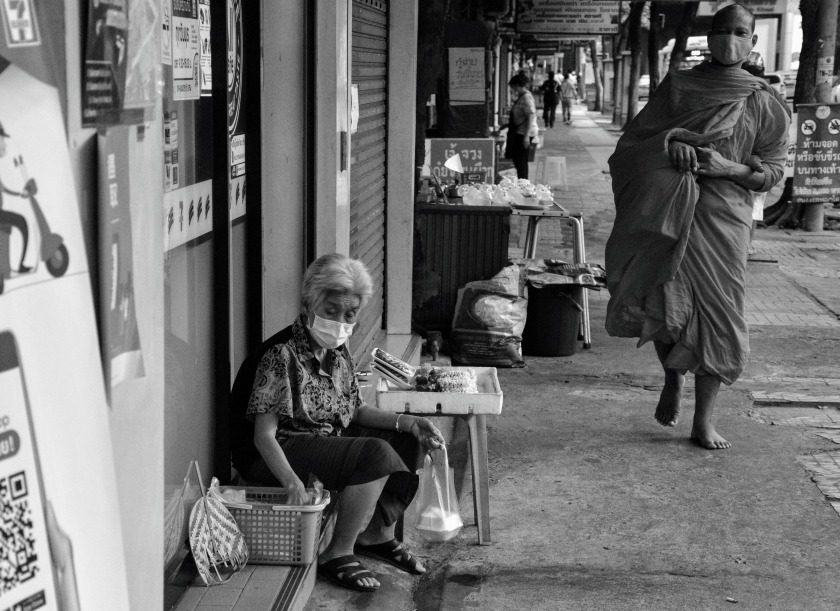 The habit of wearing face masks began in Japan in the early 20th century.

The Spanish flu was sweeping over the planet at the time. 20 to 40 million people were killed (more than World War 1); it killed 5% of the population in India.

Covering your face with a scarf or any other sort of garment was the way people were trying to ward off the sickness. The method was ineffective but it gave them some sense of control.

In China a similar pandemic had similar cultural effects a few years earlier. It was the pneumonic plague. Incidentally it was this event that helped western medicine break through in China. The plague which caused pneumonia, killed most people it infected sometimes in 24 hours. The masks helped to slow the spread. The masks became more than protective equipment; they were stamped by the monks of the local temples and thus became talismans.

Back in Japan in 1923 the Great Kanto Earthquake triggered a massive fire that destroyed Tokyo and Yokohama.

As the sky was filled with ash and smoke for weeks and the air was barely breathable, face masks became prevalent again.

In 1934 a second global flu epidemic sweeped over the globe and the Japanese brought out the masks again this time out of social courtesy as sick people didn’t want to infect the healthy.

After the second world war the rapid industrialization led to massive air pollution forcing the Japanese to wear masks year round.

As other countries in the area began to have the same issue most notably South Korea, these folk also adopted the practice. But enough history for now.

A mask may be the reason society functions during an epidemic.

Although there is little or no scientific proof of the efficacy of face masks, it makes sense to wear one if you have a cough or the sniffles. I reckon it is courteous not to share these…

Another psychological reason may be behavioral mimicry; if most people are wearing a face mask chances are you may fall in line and do the same. While walking through a city you may see people wearing face masks on the underground or the supermarket, this may convince you to wear one too. It reduces ones anxiety about getting sick.

In Hong Kong the shock of the SARS epidemic and the 2006 bird flu panic revived the wearing of masks.

Understanding epidemics are more than just biological events but social processes is paramount to their successful containment.

In many countries accustomed to wearing medical masks they actually have become fashion statements. They come in all sorts of colors, patterns and branding along with chic designs or cute animals.

In Japan wearing has become so ingrained in their culture; they are viewed as social firewalls. You wear them along side your earphones if you don’t wish to interact with other humans. They provide anonymity and are often used by young women to avoid harassment on public transport.

Some habits may be worth adopting if they allow life to normalize.

The difference in perception of the mask comes down, in part, to cultural norms about covering your face. In social interactions in the West, you need to show your identity and make eye contact. Facial expression is very important.

Maybe us westerners need to change our ways in a world that is constantly evolving.

If we want the economy to get back on track we will have to wear masks, carry hand sanitizer and socially distance while carrying out our jobs for the time being, along with protecting the most vulnerable in our societies.